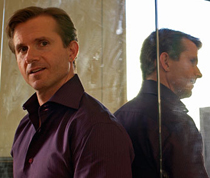 Jeremy Mann is the head of the Ray Bolger Musical Theater Program at UCLA TFT. In this capacity, he developed the singing curriculum for the undergraduate musical theater majors, and teaches singing and musical theater performance for the program. Directing credits at UCLA TFT include Into the Woods, Hot Mikado, Cabaret and A Chorus Line, and vocal direction for The Last 5 Years, Urinetown, Side Show, Homer in Cyberspace, Anything Goes and Rent. Before moving to Los Angeles, Mann served for 12 years as resident musical director and actor at the Pacific Conservatory of the Performing Arts (PCPA Theaterfest) in Santa Maria. In addition to co-creating and teaching the singing techniques for the Actor curriculum at PCPA, Mann musically directed more than 20 productions there, including Honk!, My Fair Lady, Songs for a New World, How to Succeed… and Jesus Christ Superstar. Directing credits at PCPA included Peter Pan, 42nd Street and Anything Goes, and he acted in Arcadia, The Normal Heart (Robby Award) and Rope (world premiere). Mann has also served as musical director and director for the Utah Shakespeare Festival (The Music Man, Man of La Mancha, The Spitfire Grill, HMS Pinafore, Foxfire, The Secret Garden,Great Expectations) and musically directed the world premiere of Brad Carroll and Peter Sham’s Lend Me a Tenor, the musical for USF in the summer of 2007. A lyricist and singer-songwriter, Mann is also co-creator of the original musicals Robin Hood, Christmas Is…a Musical Memory and Christmas Is Here Again, with Brad Carroll.