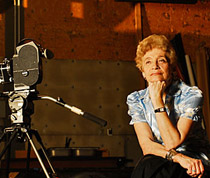 Goldovskaya received her Ph.D. in fine arts in 1987. She was a professor at Moscow State University and has been a visiting professor at UC San Diego and Vassar College.