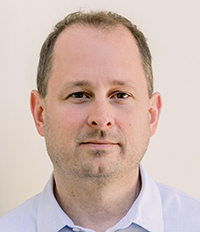 Jeff Burke is professor in-residence of performance and technology, and associate dean, technology and innovation at the UCLA School of Theater, Film and Television (UCLA TFT).

Burke is a three-time UCLA alumnus (B.S., M.S., electrical engineering; M.F.A., film, television and digital media) who has produced, managed, programmed and designed experimental performances, short films, new genre art installations and new facility construction internationally for more than 18 years. Burke has been a faculty member since 2001. In addition to his role developing technology and innovation strategy at UCLA TFT, his research explores the intersections of the built environment, computer networks and storytelling — in particular, how artists can participate in shaping the emerging digital means that they used to tell stories.

Burke was recently profiled in the UCLA Optimist campaign and is currently working on Entropy Bound, an original play incorporating machine learning, introduced in this recent UCLA Magazine article.