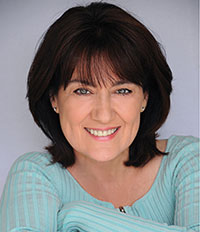 Cheryl Baxter has been in the entertainment business for more than 30 years working in theater, commercials, film and television. She started her career as an assistant choreographer to Gene Kelly and Kenny Ortega in Francis Ford Coppola’s film One From the Heart and went on to work with Meryl Streep in Death Becomes Her. She has worked on more than 20 films including Xanadu, Tap, Pennies From Heaven, 500 Days of Summer and The Muppets. She has danced beside such legends as Gregory Hines, Sammy Davis Jr., the Nicholas Brothers and Donald O’Connor.

Television credits include Glee, General Hospital, How I Met Your Mother, Community, Mike and Molly, the Academy Awards and the Golden Globe Awards. Baxter has performed in the Los Angeles and first national companies of Cats and 42nd Street and was in the Broadway telecast of Sophisticated Ladies. She has directed and choreographed theater productions nationally and internationally and directed the Cabrillo Christmas Spectacular starring Shirley Jones and Patrick Cassidy.

Baxter grew up as a dance teacher’s daughter, and began instructing children of all ages when she was 15 years old. She has taught tap for Joe Tremaine conventions and clinics for dance studios around the United States and Japan. She currently teaches tap at the Edge Performing Arts Center and at AAMDA (American Academy of Music and Dramatic Arts) and also teaches musical theater/movement for the actor at AADA (American Academy of Dramatic Arts).