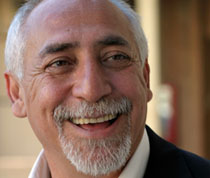 José Luis Valenzuela is the artistic director of the Los Angeles Theatre Center, and an award-winning theater and film director.

For more than 25 years, Valenzuela has directed critically acclaimed productions at major regional theaters including the Los Angeles Theatre Center, where he created the Latino Theatre Lab in 1985, and the Mark Taper Forum, where he established the Latino Theater Initiative. Stage productions he has directed include Premeditation and Solitude, both by Evelina Fernandez (LATC), La Victima by El Teatro de La Esperanza (LATC), and La Virgen de Guadalupe, Dios Inantzin (Our Lady of the Angels Cathedral), all produced by the Latino Theater Company.

His international directing credits include Henrik Ibsen’s Peer Gynt at the Norland Theatre in Norway and Manuel Puig’s Kiss of the Spider Woman at the National Theatre of Norway. In 2002, he directed the world premiere of Dementia, written by Evelina Fernandez, for the Latino Theater Initiative, which won the 2003 GLAAD Award for Outstanding Theater Production in Los Angeles. Valenzuela was featured in The New York Times in December 2007 and the Los Angeles Times in December 2008 for his annual pageant play La Virgen de Guadalupe, Dios Inantzin.

In 2006, he successfully acquired funding from the California Cultural and Historical Endowment to renovate the Los Angeles Theatre Center for which the Latino Theater Company received a 20-year lease from the City of Los Angeles.

Valenzuela’s artistic vision and community commitment has garnered him many recognitions, nominations and awards including the Ann C. Rosenfield Distinguished Community Partnership Prize presented by UCLA Center for Community Partnerships, and the Hispanic Heritage Month Local Hero of the Year Award sponsored by Union Bank and KCET, Los Angeles. Both awards recognize distinguished citizens for their contributions to improving the quality of life throughout their respective communities.