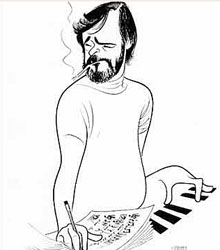 Broadway genius Stephen Sondheim came to UCLA to share his considerable experience with TFT's graduate musical theater students in an intimate master class. One of the most eagerly anticipated Master Classes last year, this conversational Q and A with one of Broadway's best provided students with an invaluable look into a mind that helped shape Musical Theater into what it is today.

Sondheim has collaborated on more than a dozen landmark shows and written countless standard songs and is also considered the most influential force in bringing the Broadway musical into the modern age. His artistic journey began when Sondheim was still in his 20s and contributed the lyrics to two classic collaborations with the playwright Arthur Laurents and director-choreographer Jerome Robbins, West Side Story (1957; music by Leonard Bernstein) and Gypsy (1959; music by Jule Styne). Both shows have been repeatedly revived on Broadway and throughout the world. Daring and unorthodox for their time, they now are universally seen as twin pinnacles of the post-war Broadway musical.

Sondheim's first produced Broadway show as both composer and lyricist, A Funny Thing Happened on the Way to the Forum (1962), had an even longer Broadway run than its predecessors. With such collaborators as director Harold Prince, director-playwright James Lapine and playwrights John Weidman, Hugh Wheeler, Burt Shevelove and George Furth, Sondheim would go on to create a remarkable succession of groundbreaking musicals: Company (1970), Follies (1971), A Little Night Music (1973), The Frogs (1974), Pacific Overtures (1976), Sweeney Todd (1979), Merrily We Roll Along (1981), Sunday in the Park with George (1984), Into the Woods (1987), Assassins (1990) and Passion (1994). His most recent show, Bounce (2003), was produced in a revised version, titled Road Show, at the 2008 New York Shakespeare Festival.