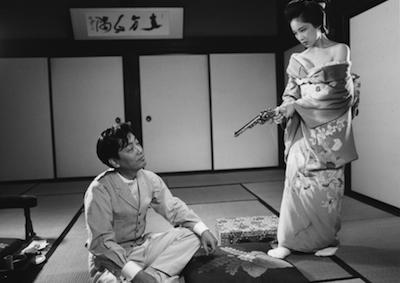 Made 10 years after its predecessor, the final film in the Taisho Trilogy spins a fantastical tale from the life of a historical figure. Takehisa Yumeji (1884–1934) was an artist known as much for his paintings of beautiful women as for his bohemian lifestyle. As played by rock star Kenji Sawada, the Yumeji of director Seijun Suzuki’s film is a serial seducer haunted by thoughts of his own death while pursuing ideals of beauty in his art. Traveling to Kanazawa to meet his lover, he instead falls for a widow whose murdered husband inconveniently returns from the dead. Love, desire, life and death collapse into one another as Yumeji’s art takes on an uncanny existence of its own.