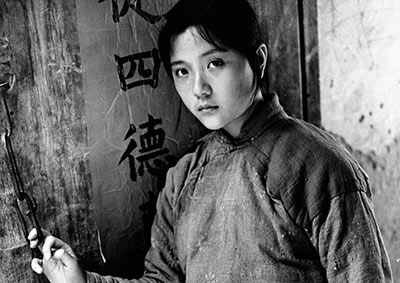 The film that changed Chinese cinema forever has lost none of its power or beauty since its explosive debut. In 1939, a young cadre comes to a dirt-poor village in Shaanxi province (the cradle of Chinese communism) to collect local folk songs so they can be adapted into Maoist anthems. (This same campaign created the theme for The East Is Red, screening on November 10). He befriends a young girl and educates her about the new social status that women will enjoy come the revolution. After he departs, she tries to follow him, with tragic consequences. Beautifully etching both the beauty and terror of rural life, director Chen Kaige and cinematographer Zhang Yimou upend all the conventions of Seventeen Years-style socialist realism through poetic symbolism drawn from ancient scroll paintings and an exquisite use of traditional folk music. A true milestone, Yellow Earth introduces all the key elements of Fifth Generation filmmaking and would help propel the Mainland to the top ranks of global cinema. “Chen Kaige and his cinematographer Zhang Yimou have invented a new language of colors, shadows, glances, spaces, and unspoken thoughts and implications; and they’ve made their new language sing” (Tony Rayns, Time Out London).

Already a renowned cinematographer for his work on such landmark Fifth Generation films as Yellow Earth, Zhang Yimou announced himself as a master director with this deceptively simple folk fable; the film also introduced the world to his muse and future wife Gong Li, who went on to become the most famous film actress to ever emerge from the Mainland. Set in the lead-up to the Sino-Japanese War, Red Sorghum tells the story of a young peasant girl, Jiu’er (Gong), whose parents sell her into marriage with an elderly winemaker. Attacked by bandits on the way to her wedding, Jiu’er is rescued by one of her palanquin bearers (Jiang Wen, sporting maximum swagger), who later returns and becomes her lover. Together they turn around the wine business she has inherited, but then have to grimly dig in to face the invading Japanese armies. From its bawdy beginnings to its tragic conclusion, where an unimaginable nightmare becomes all too real, Red Sorghum is above all a formidable visual accomplishment: every shot feels utterly original, every nuance of color a boldly symbolic flourish. “The cinematography in Red Sorghum has no desire to be subtle, or muted; it wants to splash its passionate colors all over the screen with abandon, and the sheer visual impact of the film is voluptuous” (Roger Ebert, Chicago Sun-Times).