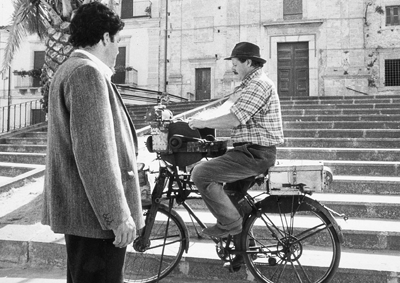 A peasant tradition of making homemade ricotta cheese on a wood-burning fire becomes an act of resistance in this unforgettable film. Amateur actors from the regional Buti theater, many of them ordinary laborers and farmers, recite or read passages from Elio Vittorini’s Marxist novella Women of Messina, their singularly musical voices ringing out as one in the verdant forest. The story, which Italo Calvino called a “choral narrative,” centers on a group of workers and peasants who rebuild their lives in the aftermath of the Second World War by rebuilding a destroyed village and forming a utopian community.

Something as simple as a herring roasting on a hearth, or a meal of bread, wine and winter melon, takes on the humble aura of a Caravaggio painting in this masterful film. That is to say, Straub-Huillet extol ordinary Sicilians who are poor of means but rich in spirit. Filmed in Syracuse and Messina, Sicilia! is a tragicomedy involving an orange peddler, an Italian recently returned from America, two “stinky” police officers, a guilt-stricken landowner, a traveling knife sharpener and, perhaps most unforgettably, an indomitable peasant mother who reminisces about meals of snails and wild chicory, her husband’s philandering and cowardice, and her own father’s belief in an honest day’s labor, socialism, and St. Joseph.