Wong Fei-Hung: The Whip That Smacks the Candle & The Story of a Discharged Prisoner 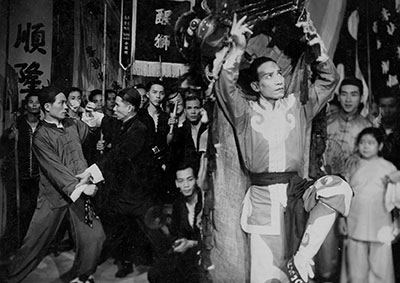 One of the most revered of Chinese folk heroes, the legendary martial artist Wong Fei-hung (1847-1924) is also one of the most popular and enduring screen characters in cinema history. A tried and true symbol of Chinese tradition and patriotism standing tall against Western influence and foreign incursion, Wong was portrayed at various ages and in numerous incarnations, from the comic to the ultra-serious, in over 100 feature films—most famously by Jackie Chan (in 1978’s Drunken Master and its absolutely awesome 1994 sequel) and Jet Li (in the Once Upon a Time in China series). But Wu Pang’s 1949 The Whip That Smacks the Candle started it all: not only did it bring Wong to the screen for the first time in the person of Chinese opera star Kwan Tak-hing (who would go on to play the role in over 70 features, serials and TV episodes), it set the template for the modern kung fu genre by eschewing the fantasy elements of the silent era wuxia films in favor of realistic action choreography and a focus on the importance of martial arts discipline and technique. Come see where it all began!

Followed by:
“The Story of a Discharged Prisoner” (Hong Kong, 1967)
Directed by Patrick Lung Kong

Only recently being rediscovered, this tough-as-nails, black-and-white crime thriller from 1967 has had an enormous and lasting influence: it served as the basis for John Woo’s 1986 bullet-ballet opus A Better Tomorrow, which made “heroic bloodshed” the new face of Hong Kong action cinema. Patrick Tse Yin stars as the eponymous ex-con Lee Cheuk-hung, who is released from prison after 15 years to discover his fiancée has become the mistress of powerful triad boss One-Eyed Jack (Shek Kin, best known in the West as the villain in Bruce Lee’s Enter the Dragon), who tries to recruit Lee into his gang; determined to stay on the straight and narrow, Lee refuses. But when the vengeful Jack starts putting the pressure on, the former foot soldier is forced to once again show that he has the “true colors of a hero” (as per the film’s original title). Both a groundbreaking action melodrama (featuring fight choreography from legendary martial arts master Lau Kar-leung’s brother Lau Kar-wing) and a forceful, socially conscious portrait of the plight of the marginalized in a rapidly modernizing Hong Kong, The Story of a Discharged Prisoner is “[both] a damning critique [and] a call for hope…[this] is filmmaking at its sharpest and most masterful” (South China Morning Post).