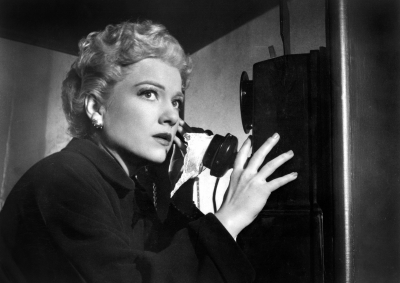 Ann Sutton is a kleptomaniac, but she might also be a murderer, having been found at the scene of the crime without any memory of how she got there. Giving one of the best performances of her career, Gene Tierney plays an innocent beauty who “performs” for men, just as she as an actress performs for the director. Indeed, Whirlpool has been interpreted as a metaphor of filmmaking.

Followed by:
The Blue Gardenia (1953)
Directed by Fritz Lang.

Norah Larkin (Anne Baxter), a telephone operator, goes out on a blind date, gets terribly drunk, and goes home with an artist and blacks out. The next day the artist has been murdered and she is a prime suspect, although she remembers nothing. Director Fritz Lang’s portrait of a cold and desperate Los Angeles begins as a noir, but ends in the harsh light of a California summer.