‘We Were Strangers’ and ‘The Red Badge of Courage’ 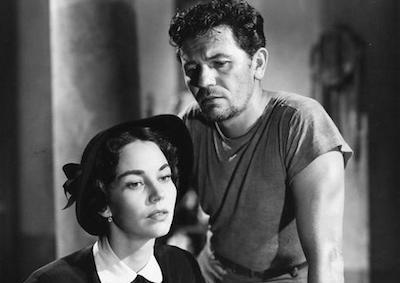 We Were Strangers (1949)
Directed by John Huston

We Were Strangers was the first film made under the banner of Horizon Pictures, the independent production company Huston formed with producer Sam Spiegel. Huston’s move to independent production was in step with the times, but his choice of first project ran decidedly against the grain. John Garfield stars as an expatriate Cuban raised in America who returns to the island intent on overthrowing the corrupt Cuban government. Jennifer Jones plays the sister of a slain opposition leader, who joins Garfield’s assembled crew of revolutionaries—that includes Gilbert Roland and Ramon Novarro—in their plan to assassinate a Cuban senator and kill the rest of the government, en masse, with a bomb at his funeral. Huston wrings much of the film’s grinding tension from their efforts to dig a tunnel under a cemetery as Pedro Armendáriz’s government agent closes in. A thriller that seems to openly champion political violence, We Were Strangers opens with a line from Thomas Jefferson— “Resistance to tyrants is obedience to God” — but that didn’t dissuade The Hollywood Reporter from branding it a “shameful handbook of Marxian dialectics…the heaviest dish of Red Theory ever served to an audience outside the Soviet.”

The Red Badge of Courage (1951)
Directed by John Huston

Huston’s original two-hour-and-fifteen-minute version of The Red Badge of Courage, a faithful adaptation of Stephen Crane’s classic American novel, has been lost to history. The studio politics and short-sightedness at MGM that doomed it is documented with literary panache by Lillian Ross in

(Da Capo Press), her behind-the-scenes book on the movie’s making and unmaking. As one version of events goes, after a disastrous preview screening, Huston skipped town to make The African Queen (1952), leaving the final cut in the hands of producer Gottfried Reinhardt and studio exec Dore Schary, who slashed it in half and added a voice-over narration. Huston had long been drawn to Crane’s Civil War story about a young soldier (Audie Murphy) who runs from his first battle, and his emotional struggle to return to the fight. Even radically altered, Huston’s rendering of it remains a deeply personal, wholly original vision of fear and courage before the horrors of war. Narration aside, the film unfolds with minimal dialogue, a profound silence shaping the emotions read on the faces of a largely unprofessional cast, while Harold Rosson’s cinematography evokes Mathew Brady’s haunting Civil War photos and Huston’s own war documentaries.