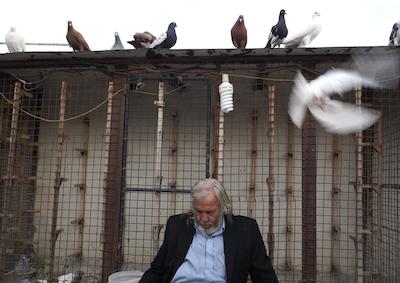 Every day for 20 years, Sakineh has gone fishing, often with her friend Sobra, to make a living for their families. They are two members of a small community of fisherwomen on Hangam Island in the the Persian Gulf who are the subject of Azadeh Bizgariti’s intimate and beautiful documentary. Winner of the best short documentary film from Cinema Verite Tehran.

In his previous works Dingomaro and My Name Is Negahdar Jamali and I Make Westerns — which screened in the 2014 and 2015 UCLA Celebration of Iranian Cinema — documentarian Kamran Heidari established a reputation as a peerless cinematic portraitist of eccentricity. With Ali Aqa, Heidari turns his penetrating but empathetic lens on an aging pigeon fancier whose hobby has become an all-consuming obsession.