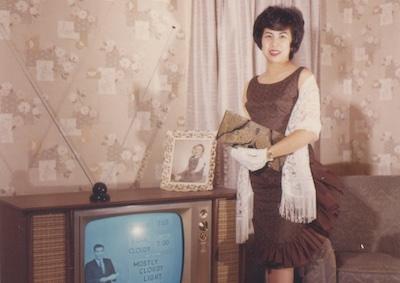 Made possible by the John H. Mitchell Television Programming Endowment

In this illustrated talk, Professor Lynn Spigel (MA ’84, Ph.D. ’88) will discuss her new book, TV Snapshots (Duke University Press), which examines snapshots of people posing in front of their television sets in the 1950s through the early 1970s. Like today’s selfies, TV snapshots were a popular photographic practice through which people visualized their lives in an increasingly mediated culture. Drawing on her collection of over 5,000 TV snapshots, Spigel will illuminate that people did not just watch TV: women used the TV set as a backdrop for fashion and glamour poses; people dressed in drag in front of the screen; and in pinup poses, people even turned the TV setting into a space for erotic display. While the television industry promoted on-screen images of white nuclear families in suburban homes, the snapshots collected by Spigel depict a broad range of people across racial, ethnic, and class backgrounds that do not always conform to the reigning middle-class nuclear family ideal. Showing how the television set became a central presence in the home that exceeded its mass entertainment function, Spigel’s talk will bring into focus how TV snapshots complicate our understanding of the significance of television in everyday life.

A brief discussion between Lynn Spigel and Pamela Robertson Wojcik, Professor and Chair in the Department of Film, Television, and Theatre at the University of Notre Dame will follow the book talk.

Event will conclude with a screening of two rare television programs: Photographic Horizons (DuMont, 1948) and Symphony of Fashion (KTLA, 1961).

Program notes above adapted from notes by the Duke University Press.