Trouble in Paradise and I Take This Woman 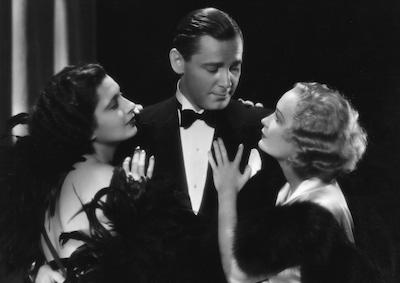 The playboy/thief Gaston Monescu (Herbert Marshall) meets the expert pickpocket Lily (Miriam Hopkins) on the Riviera, and they, of course, fall in love. Initially, they try to steal from each other—a kind of foreplay among thieves—then realize their mutual interests make them a perfect team. In Paris, Gaston gets a job as personal secretary to the wealthy heiress to a perfume company, Madame Mariette Colet (Kay Francis), hiring Lily as maid, so they can rob her blind. Unfortunately, while cleaning up the corruption on her company’s board, and settling into a comfortable lifestyle, he also falls in love with her, and must decide between two women, one who offers excitement, the other, stability.

I Take This Woman (1931)
Directed by Marion Gering

Restored by UCLA Film & Television Archive with funding provided by The Louis B. Mayer Foundation

No more whoopee parties for feckless Kay Dowling. Dispatched to Wyoming by her millionaire father to avert a scandal, the Manhattan princess further compromises her reputation with cowpuncher Tom McNair. Disowned by daddy, Kay marries her buckaroo only to be exiled to a desolate little shack on the prairie.

Based on a 1927 serial in The Saturday Evening Post, Lost Ecstasy by Mary Roberts Rinehart, the plot of the spoiled Eastern girl confronting rough and tumble life in the West was already an established cliché in popular fiction. Rinehart was one of the most successful fiction writers of the 1920s, best known for her mysteries such as The Bat and Miss Pinkerton, though she wrote in many genres. Russian émigré stage director Marion Gering made his cinema debut with I Take This Woman. Gering’s career at Paramount includes such notables as Devil and the Deep (1932), 24 Hours (1931), Thirty Day Princess (1934) and Madame Butterfly (1932).

This short, not seen by audiences since 1931, features rare footage of Jean Harlow and Bela Lugosi discussing Dracula, as well as Walter Huston performing a musical number. It exists solely in fragmentary form.