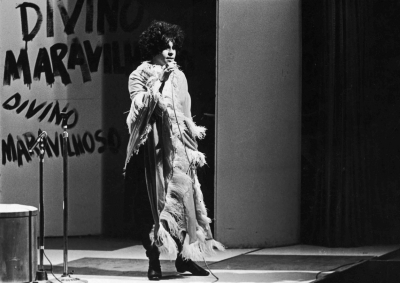 Taking the audience on a tour through the sounds, images and history of one of Brazil’s most iconic cultural movements, Tropicália shows the sparks that flew when musicians, artists and filmmakers reclaimed the country’s “cannibalistic” past and fused a diverse range of influences into something uniquely Brazilian and of the moment. In particular, the film focuses on Caetano Veloso and Gilberto Gil who became generational lightning rods, eventually jailed and exiled, for their music.

Brazil’s music “festivals” of the mid-1960s were boisterous, televised competitions akin to American Idol today. One such show in 1967 was a particularly raucous affair that sparked a revolution that forever changed Brazilian music. Captivating archival performances by Caetano Veloso, Gilberto Gil, Os Mutantes and Chico Buarque—alongside contemporary interviews from the key players—helps recreate the night when the still-forming Tropicália movement was introduced to the public.