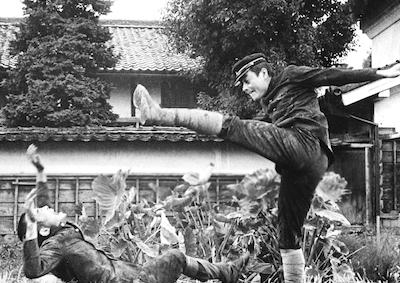 Tasked with making a vehicle for actor/singer Tetsuya Watari to croon the title song, director Seijun Suzuki concocted this crazy yarn about a reformed yakuza on the run from his former comrades. The film is mainly an excuse to stage an escalating series of goofy musical numbers and over-the-top fight scenes. Popping with garish colors, self-parodic style and avant-garde visual design, Tokyo Drifter embodies a late-1960s zeitgeist in which trash and art joyfully comingle. “With influences that range from Pop Art to 1950s Hollywood musicals, and from farce and absurdist comedy to surrealism, Suzuki shows off his formal acrobatics in a film that is clearly meant to mock rather than celebrate the yakuza film genre.” —Nikolaos Vryzidis, Directory of World Cinema: Japan.

Set in the 1930s, this darkly comic film is the story of Kiroku, a high school kid who lusts after the pure, Catholic daughter of the family with whom he boards. The only relief he can find for his immense sexual frustration is through fighting, which at first gets him into trouble, but later makes him perfect cannon fodder for the Sino-Japanese War. As with Story of a Prostitute (1965), the subject of militarism inspired director Seijun Suzuki to make one of his most personal and impassioned works. “One of Suzuki’s indisputable masterpieces, this subversively funny account of the making of a model fascist goes where no film had gone before in search of comic insights into the adolescent male mind.” —Tony Rayns.