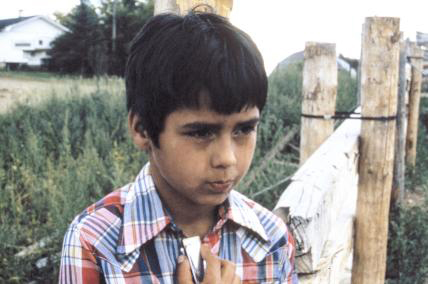 Tikinigan (Canada, 1991)
Directed by Gil Cardinal (Métis).
In northwestern Ontario, Tikinagan, a child services agency run by First Nations people, works to support children and overcome the legacy of mistrust caused by provincial child welfare agencies by making sure children are cared for within their own communities. This candid documentary explores the heart-rending struggles facing Native youth, and this revolutionary community-based program.

The Honour of All: Part 1 (1986)
Directed by Phil Lucas.
Andy Chelsea, Chief of the Alkali Lake Indian Band, and his wife Phyllis recognize that their alcoholism threatens to destroy their family, and that virtually their entire community is similarly afflicted. This deeply moving film by Phil Lucas recounts the true story of a community’s journey to sobriety, enacted by a cast made up of many of the actual subjects.

Preceded by:
Richard Cardinal: Cry From a Diary of a Métis Child (Canada, 1986)
Directed by Alanis Obomsawin.
Director Alanis Obomsawin chronicles the true story of an Aboriginal boy, tossed into a callous foster care system that eventually drove him to suicide. The case triggered a massive controversy in Canada forcing reform of the treatment of Indigenous foster children.