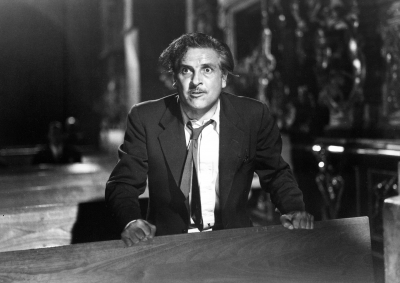 A masterpiece of psychological deconstruction, Luis Buñuel’s portrait of an insanely jealous husband calls upon actor Arturo de Córdova’s extraordinary depths of perception, as what should have been a man’s happy marriage is rent asunder by his insecurity and mad suspicion. Ably portraying an unusually tortured and conflicted man, de Córdova manages to imply in his rage and remorse that all romance boils down to this.

Written and directed by Julio Bracho

Esteemed surgeon Alejandro (Arturo de Córdova) is tormented by his failure to save the life of his friend in surgery. Meeting and falling in love with artist’s model Lucia, he returns from a voyage to find that she has married his brother, setting up a second emotional vortex. Plot and character all flow to a generalized mood of dread and longing, with de Córdova brilliantly positioned at the heart of this nexus.