This Life of Mine 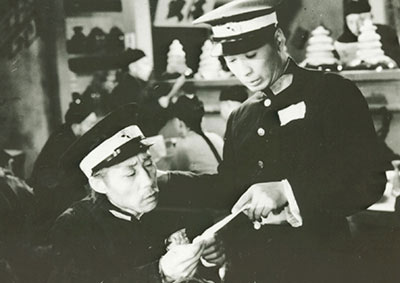 “Shi Hui, driven to suicide in Mao’s ‘Anti-Rightist Purge’ of the late 1950s, was one of the greatest screen actors ever and a very fine director; this adaptation of a short story by Lao She was probably his best work” (Tony Rayns, Time Out London). The first film produced in Shanghai after the end of the civil war, This Life of Mine delicately balances the interest in earthy local language that was a hallmark of the May 4th Movement with the class analysis demanded by the new regime. It is also among the first fully realized examples of Soviet-influenced cinematography in Chinese cinema: the film’s sublime play of light and shadow was much admired and frequently imitated in the years to come. The film traces the history of 20th-century China from the fall of the Qing dynasty through to the 1949 Revolution through the eyes of a simple Beijing policeman, played by actor-director Shi Hui, who brilliantly conveys the changing face of the Chinese people through four tumultuous decades of conflict. “The ultimate discovery. As an expression of the New China’s spiritual turmoil, the film engages in intense moral inquiries and ambiguities that are unparalleled in socialist cinema, even as it tries to toe the party line” (Andrew Chan, The L Magazine).

One of the major discoveries of this series and one of the greatest POW films of all time, Shangrao Concentration Camp is set in the hellish confines of a Guomindang (Nationalist) prison, where the brutal officials try to force two female Communist prisoners to reveal their leader’s identity and location. While its subject and year of production might suggest a propaganda film, Shangrao has garnered some interesting (if chronologically impossible) comparisons to Bresson from some critics for its intense, haunting minimalism, though its true roots are in the Soviet cinema then widely distributed in China; in particular, the great cinematographer Zhu Jinming offers a brilliant echo of Dovzhenko’s overwhelming landscapes in his images of China’s rugged northern climes. With an extraordinary use of long takes and surprisingly mobile camera movements accentuating the passionate, earthy performances of leads Tang Hua Da and Jiang Jun, Shangrao Concentration Camp is, “a powerful meditation on human relations under pressure” (Paul Clark, “Chinese Cinema: Culture and Politics Since 1949”).