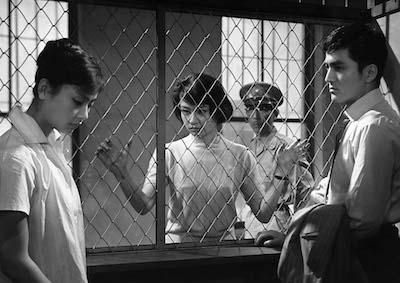 The Sleeping Beast Within (Japan, 1960)
Directed by Seijun Suzuki

A businessman vanishes upon his return from an overseas trip, and his daughter hires a reporter to help find him. When the father reappears, the reporter becomes suspicious and starts digging deeper, uncovering a secret world of heroin smuggling and murder—all tied up with a mysterious Sun God cult. This proto-Breaking Bad moves to an energetic pulp fiction beat all the way to its spectacular conflagration of an ending.

This crime thriller features one of the most nihilistic characters in director Seijun Suzuki’s early films: Katiri, a reporter so ambitiously amoral that he’ll sell out anyone—including his partner and the drug dealer he’s sleeping with— to get a scoop. But what happens when an even more ruthless female gang boss kidnaps his sister? With its jazzy musical score and sordid milieu of drug smuggling and human trafficking, Smashing the O-Line (1960) is one of Suzuki’s darkest urban tales.