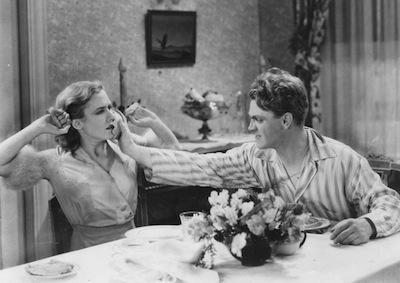 The Public Enemy (1931)
Directed by William A. Wellman.

Two slum kids grow up to become bootleggers until the law catches up with them. Upon reading the script, director William A. Wellman talked Darryl Zanuck into letting him make the gangster film by promising that it would be “the toughest goddamn one of them all.” He delivered, thanks in part to a last minute casting switch that put James Cagney in the lead. Cagney’s snarling performance and the sex and violence of the story set the genre standard for decades to come. Wellman claimed credit for one of the film’s most shocking scenes—when Cagney shoves a grapefruit into Mae Clarke’s face—citing tension in his third marriage as inspiration.

Followed by:
Night Nurse (1931)
Directed by William A. Wellman.

Fast-paced, sexy and over the top, this medical melodrama has a nurse uncovering a plot to starve two little girls to death for their inheritance. A brutish chauffeur (Clark Gable) aids and abets the evil plot, but he’s foiled by Lora Hart (Barbara Stanwyck), shown in pre-Code lingerie during much of the action. Characteristic of director William A. Wellman’s filmic women, Stanwyck is tough and funny, with energy to spare.