The Pajama Game and Damn Yankees 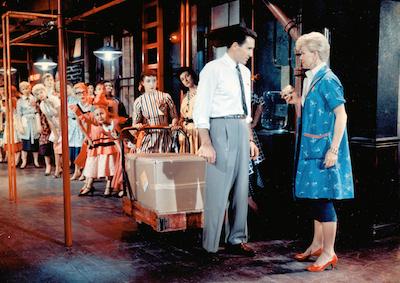 One of the earliest sequences Bob Fosse choreographed that announced his mature style is in Stanley Donen’s The Pajama Game, a musical about American labor unions. His number “Steam Heat” features dancers with a typically nostalgic Fosse look — bowler hats, spats and suits — imitating steam valves and dancing in unison to form a kind of human locomotive. While the athletic dancing of the typical postwar American musical was often meant to express a kind of rugged individualism, Fosse’s dancers (one of whom is a woman) all wear exactly the same costume and often move as if they were all parts of one machine.The gestures of the dancers also refer to the movements of laborers. These movements are quotations, not the expression of the dancers’ individual selves.

Bounding, balletic ballplayers?! Damn Yankees has got ’em! Based on the Broadway musical (which Bob Fosse also choreographed, and which earned him one of his eight Tony Awards), this filmic celebration of America’s favorite pastime pivots on a Faustian bargain made by a frustrated, middle-aged Washington Senators fan who trades his armchair existence for Tab Hunter’s grand-slammin’ physique in order to lead his favorite team all the way to the World Series.