The Oyster Princess, I Don’t Want to Be a Man and Forbidden Paradise 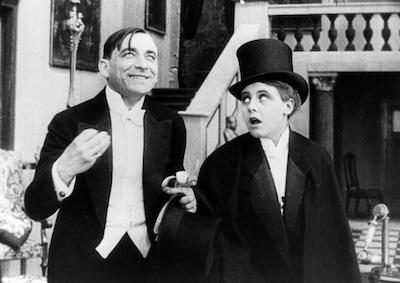 The spoiled daughter of an American industrialist (Ossi Oswalda) demands that her father (Victor Janson) procure a prince for her to marry, periodically demolishing their gargantuan villa when she doesn’t get her way. An impoverished Prince Nucki (Harry Liedtke) fills the bill, but he wants to make sure the prospective bride is sufficiently wealthy, leading to complications. For Lubitsch, the greatest sin of these boorish American nouveaux riches are their bad manners. They sleep too long, keep their guests waiting, talk incessantly. Lubitsch considered The Oyster Princess “my first comedy which showed something of a definite style.” Indeed, Lubitsch’s satire develops for the first time from his mise en scène: the sheer pomposity of the wedding feast with 300 waiters, the frustration of a manservant as he paces in circles around an intricately designed parquet floor, the hundreds of photos of eligible bachelors on the wall in the marriage brokers office.

A young woman who likes to party, but whose style is cramped by her uncle and guardian, decides to dress as a man to have fun. At an event she meets her uncle, who doesn’t recognize her, but rather falls in love with her male incarnation. Hosenrollen (“trouser rolling”) was common in European theater, and LGBTQ audiences have embraced the film’s ambiguous sexual politics.

Loosely based on Catherine the Great, but set in the 20th century, Pola Negri’s Czarina is an insatiable nymphomaniac who eats men for breakfast, giving them a medal after sexual services. When the young Lieutenant Alexei (Rod La Rocque) gets wind of an officer’s revolt against the Czarina — the men are tired of being treated as sexual objects — he rushes to the palace. There he is promptly if unwillingly seduced — he actually loves a lady-in-waiting. Meanwhile, her Chancellor (Adolphe Menjou) settles the revolution with a checkbook. Loaned out to Paramount and reunited with the temperamental star of many of his German epics, Pola Negri, Lubitsch let his décor speak for him: When Alexei is too dumb to understand that he should bend down to kiss the Czarina, she gets a footstool to reach up to him. At a banquet, all her officers sit at a long table, each sporting identical medals on their chest.