‘The Night of the Iguana’ and ‘Reflections in a Golden Eye’ 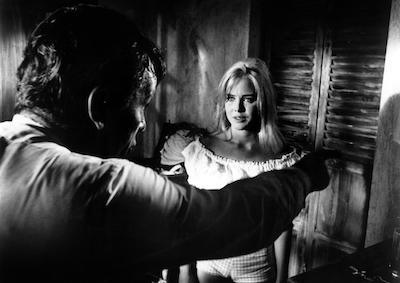 The Night of the Iguana (1964)
Directed by John Huston

Perhaps one of the best films ever made from a Tennessee Williams play, Huston’s first of two collaborations with famed Mexican cinematographer Gabriel Figueroa smashes Italian absurdism (some moments seem very Fellini-esque) up against American realism under the sweltering Puerto Vallarta sun for a languid, microscopic examination of broken humanity. Clergyman Reverend Dr. T. Lawrence Shannon (a gruff but vulnerable Richard Burton), kicked out of his congregation due to his penchant for pubescent girls, is now a low-rent tour guide in Mexico who finds himself in the crosshairs of not one, but three sirens (Deborah Kerr, Sue Lyon and Ava Gardner), each facilitating, in one way or another, the complete undoing of Shannon’s already fragile ego.

Reflections in a Golden Eye (1967)
Directed by John Huston

With so much of the psychosexual tension in Carson McCullers’ novel rooted in its characters’ interiority, it’s little surprise the source text was notoriously deemed “unfilmable,” a challenge at which Huston consistently thumbed his nose — as well as one he would embrace — throughout his career. Following her Oscar-winning triumph in Who’s Afraid of Virginia Woolf? (1966), Liz Taylor embodies the lascivious Leonora, the minx at the rotating center of a mean-spirited love triangle betwixt her homosexually repressed husband Major Penderton (a bereft yet violent Marlon Brando) and Lt. Col. Langdon (Brian Keith), whom her husband also fancies. “A moody and rather magnificent tale of strange desires and bizarre fancies” (Sight & Sound), we encounter neuroses on naked display in this brooding take on woebegone masculinity and its self-destructive trajectory. Fans of the error-prone losers in Reflections will find a kindred spirit in Huston’s earlier Freud (1962).