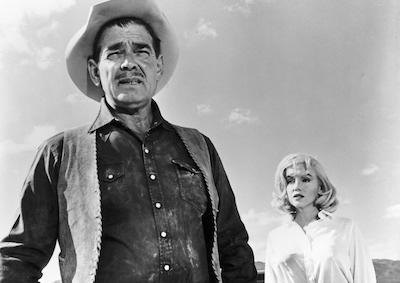 The Misfits (1961)
Directed by John Huston

Shot in the scorching heat of Nevada, The Misfits was the first film Huston had made in the United States since The Red Badge of Courage in 1951. In the intervening decade, Huston had more than his share of critical and commercial successes (The African Queen, Moulin Rouge, Beat the Devil, Heaven Knows, Mr. Allison) but most immediately he was coming off a string of disappointments (The Unforgiven, The Roots of Heaven, The Barbarian and the Geisha). The volatile nature of the extraordinary central cast assembled for the film — Clark Gable, Marilyn Monroe and Montgomery Clift — didn’t start things off on solid footing. Before the film was completed, Monroe’s marriage to screenwriter Arthur Miller had dissolved and Gable had died of a heart attack. Despite the challenges of yet another grueling production, The Misfits is one of Huston’s strongest portraits of the wounded, self-destructive searchers he was drawn to throughout his career.