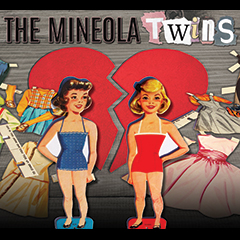 “The Mineola Twins strikes a fine balance between humor and drama…it’s one of [Vogel’s] most appealing, accessible plays.” — Nick Green, Chicago Reader Get Tickets “Vogel comments on a world in which rules hem in women while there are, as Myrna says with placid acceptance, ”no absolutes for guys.'”
— Ben Brantley, The New York Times