How to Take a Bath /Mom and Dad / Test Tube Babies 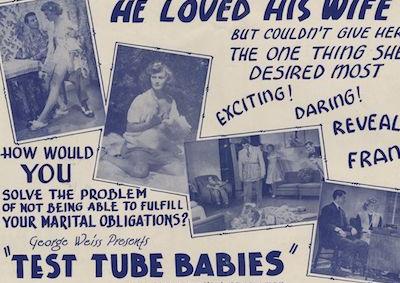 The second volume of this notorious newsreel zeroes in on the “new plague scourging the nation” kidnap murders. The Lindbergh case is a leaping off point for a detailed recounting of two other infamous kidnappings of the era, that of Marion Parker in 1927 in Los Angeles and the taking of nine-year-old George Weyerhaeuser in Tacoma in 1935.

The easing of domestic tensions is the cover story for this little number. After history’s most uncomfortable bridge game, two couples retire to their respective homes where the wives each undress incrementally before stepping in the bath. While one harangues her husband about his losing bridge game and failing career, the other offers her man reassuring compliments and soothing come ons.

The only film in this series on the National Film Registry, Mom and Dad was one of the most successful exploitation films of the 1940s, earning not only the wrath of the Legion of Decency and countless local DAs who sought to block its exhibition but also record grosses at the box office. The censorious brouhaha only served to reinforce the film’s call for public sex education and condemnation of those who believe “ignorance is as good as virtue.” An innocent high school girl, Joan falls for an older guy and finds herself in “trouble” and no one to turn to. To provide the right educational cover for its titillating night club excursions and roadside rendezvous—Mom and Dad was exhibited with an intermission during which a sex hygiene “commentator” would address the audience.

The post-war suburban swinger scene tempts a new bride because—so the logic of this film goes—her husband’s work hours and their lack of a child leaves her terminally bored. As her mother advises, “You need a baby. You’re getting neurotic.” After an especially raucous neighborhood shindig climaxes in a living room clearing brawl between two drunk women, the couple seeks a doctor’s help to find out why they can’t conceive. The relentless drone of medical information about artificial insemination that follows verges on the hypnotic. A cruelly rational climax given the abandon of the set up.