‘The Man Who Would Be King’ and ‘Sinful Davey’ 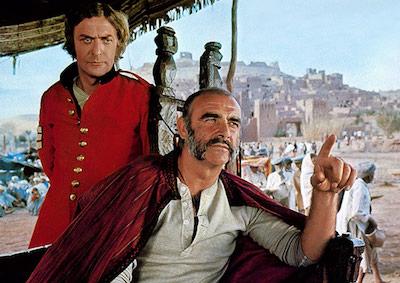 Rudyard Kipling’s cautionary tale of colonial adventurism about a pair of British mercenaries who, through luck and pluck, become rulers of an ancient kingdom Kafiristan, had been a preoccupation of Huston’s since he first read the story as a boy. He had tried several times to make a film of it over the years but it wasn’t until 1973 when John Foreman, producer on The Life and Times of Roy Bean (1972) and The MacKintosh Man (1973), agreed to back the project that it finally became a reality. Sean Connery and Michael Caine play the two fortune seekers who find themselves in command of a paradise that they inevitably bring crashing down around themselves. While offering a biting critique of power and arrogance, it was the film’s sense of classic adventure that critics and audiences responded to. As Roger Ebert declared, “it invites comparison with the great action films like Gunga Din, and Mutiny on the Bounty, and with Huston’s own classic The Treasure of the Sierra Madre.”

Ireland stands in for Scotland in Huston’s adventure-comedy response to the hippie-youth culture of the day, a picture tonally and thematically in stark contrast to the same year’s romantic A Walk with Love and Death (which also features his youthful daughter Anjelica). Its pitch-black, jaunty humor was perhaps lost on critics and audiences alike, leading it to be pulled from distribution after one short week and thusly deemed one of the biggest box office flops of Huston’s career.