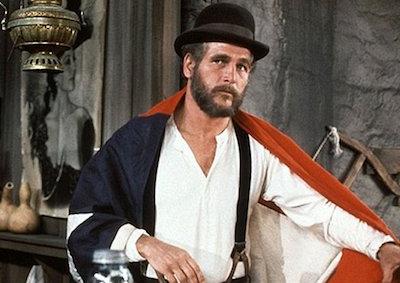 John Huston described The Life and Times of Judge Roy Bean as “more of a romance than a historical document…a pure fantasy.” Huston and screenwriter John Milius certainly play fast and loose with the facts of the real Judge Roy Bean’s life, but more to Huston’s point, he brings a sense of liberating, genre-defying sense of the carnivalesque to his first Western since The Unforgiven (1960). Paul Newman plays the apocryphal Judge who, through sheer will, transforms a dust speck of a frontier town into his personal kingdom, meting out his idiosyncratic justice in the name of his one great obsession, actress Lilly Langtry (Jacqueline Bisset). A folkloric song to individualism and personal aggrandizement, Life and Times prefigures The Man Who Would Be King (1975).

In The MacKintosh Man, Paul Newman stars as a British spy working undercover as a jewel thief to break up a ring of Soviet agents who have been breaking high-risk assets out of jail. In interviews after its release, just about everyone involved — John Huston, Newman and screenwriter Walter Hill — confessed that the project was more an obligation than one of passion. Hill and Newman had contractual obligation to Warner Bros. and Huston felt obligated to Newman out of a personal affection for the time they had together making Judge Roy Bean — that and the money was good. They’re each harsher in their assessment than need be. Shooting in his beloved Ireland, as well as London and Malta, Huston serves up a thriller straight, something he hadn’t done since perhaps for the first time in his career.