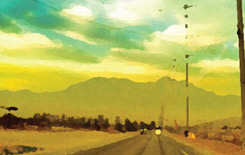 By Moises Kaufman and members of the Tectonic Theater Project
Directed by Bryan Puckett
As told by friends, family and inhabitants of Laramie, Wyoming, as well as published news reports, this play chronicles the 1998 murder of gay teenager Matthew Shepard and closely examines hate and homophobia in our society.
Featuring undergraduate actors from the Department of Theater.
December 9-13, 2014 at 8 p.m.
December 13, 2014 at 2 p.m.