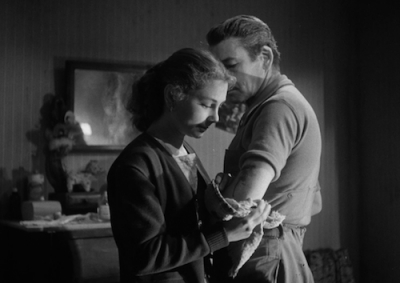 The Intimate Stranger a.k.a. Finger of Guilt (UK, 1956)
Directed by Joseph Losey.

Of all the blacklisted exiles’ European films, The Intimate Stranger provides the most direct allegory of their experience. Richard Basehart plays Reggie Wilson, a Hollywood director now working in England on account of an undisclosed scandal. Howard Koch’s (as Peter Howard) screenplay abounds in noir tropes that resonate with the insecurities caused by blacklist and exile: Reggie is haunted by his past, is threatened by an informer, and blackmailed by a femme fatale. Director Joseph Losey’s noir visuals add to the sense of entrapment.

Followed by:
Stranger on the Prowl (Encounter / Imbarco a mezzanotte) (Italy/US, 1952)
Directed by Joseph Losey.

An independent production of the blacklisted exiles’ Riviera Films, Stranger on the Prowl/Encounter explores the affinities between film noir and Italian neo-realism. Paul Muni stars as a fugitive guilty of manslaughter, while director Joseph Losey uses the bombed Italian port city of Livorno to enhance the film’s account of postwar poverty and desperation. Threatened with a boycott by conservative groups, Encounter was renamed Stranger on the Prowl for its U.S. release, and the names of Losey and screenwriter Ben Barzman removed.