The Hitch-Hiker and On Dangerous Ground 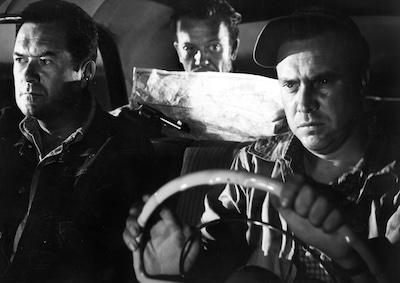 The Hitch-Hiker (1953)
Directed by Ida Lupino

New restoration from the Library of Congress!

Easily Ida Lupino’s best-known directorial effort, The Hitch-Hiker is noteworthy not just as a masterclass in the art of suspense, but also as the first noir helmed by a female filmmaker. Submerging her audience into the “based-on-a-true-story” nature of the events depicted within the picture’s taut 71 minutes before the title card even hits the screen, Lupino injects true-to-life terror into this fictionalized account of real-life serial killer Billy Cook, whose six-murder rampage spanned 22 days in 1950-51. Renamed Emmett Myers for the screen, William Talman (Perry Mason) plays the psychotic hitcher who interrupts two men (Frank Lovejoy, Edmond O’Brien) on their fishing vacation just south of the California-Mexico border, promising to murder them both when he reaches his destination.

Ida Lupino doesn’t appear onscreen until half-way through director Nicholas Ray’s jolting, divergent noir, but right from her ethereal entrance she casts an essential spell over the whole project. Robert Ryan plays a violent city cop exiled upstate to assist with a murder investigation. On the hunt in the wintry, mountain landscape, he comes across the remote home of a blind woman (Lupino) and what begins as ferocious thriller becomes an almost mystical meditation on loneliness and redemption.