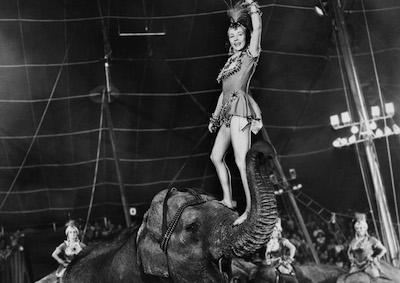 The Greatest Show on Earth (1952)
Directed by Cecil B. DeMille.

The backstage romances and rivalries of circus trapeze artists, animal trainers and clowns fill out this grand portrait the circus, offering thrilling aerial stunts and amazing set pieces, including the crash of a circus train full of animals. Director Cecil B. DeMille’s one concerted look at the lives of show people (he himself had begun his career in the theater) won the Best Picture Academy Award.