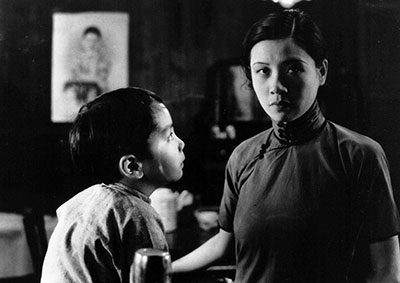 Silent screen legend Ruan Lingyu, giving a fierce and tragic performance in her signature role as a wronged prostitute, is the electric center of The Goddess, one of the most powerful silent films of all time and an early high point for Chinese cinema. Ruan plays a nameless young “goddess” (1930s slang for her actual profession) who walks the streets in order to provide for her son. A run-in with a petty gangster results in the hoodlum becoming her pimp against her will; after he does nothing to help when her son is expelled from school, and ultimately steals the tuition money she had set aside, she exacts a terrifying vengeance. Key Second Generation director Wu Yonggang brings both an unsparing eye and a gentle humanism to this exceptional film, never flinching from the realities and consequences of the heroine’s work but never judging her for resorting to what was (and is) a relatively normal profession. But Ruan’s luminous performance and presence is the true crux of the film: scholars Chris Berry and Mary Farquhar consider her character in The Goddess, “a remarkable condensation in one figure of different aspects of the times,” including Confucian family devotion, gender, national identity, the new complexities of capitalism, and Ruan’s own scandalous off-screen image (as brilliantly depicted in Stanley Kwan’s 1992 Ruan biopic Center Stage).

New Women was iconic actress Ruan Lingyu’s swan song, released mere months before her suicide; its story, thinly adapted from the memoir of Ai Xia, an actresses hounded to death by the press several years earlier, eerily parallels Ruan’s own tragically short life. “Often seen [by critics] as a metaphor for China itself, suffering under semi-colonialism, semi-feudalism and Japanese invasion” (Chris Berry and Mary Farquhar, “China On Screen”), Ruan here plays the very model of a “new woman,” an independent-minded music teacher who dreams of becoming a celebrated writer. Her struggles, intensified by lecherous and vengeful men out to manipulate her and the need to provide for her sick daughter in the countryside, are contrasted with those of her best friend, a patriotic female factory worker who is presented as a model figure for post-revolutionary women. Influential left-wing director Cai Chusheng experiments with both the literary humanism of the May 4th Movement and the new revolutionary class politics in this fascinating transitional film, making Ruan both the embodiment of the era’s complexities and contradictions and the hope for their resolution; as Berry and Farquhar write, “If Ruan herself embodies a China that cannot act now, she also acts as a channel for the expression and articulation of hopes for future agency.”