The Fugitive and Vera Cruz 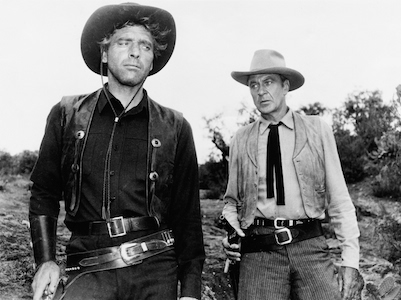 The Fugitive (1947)
Directed by John Ford

Besides the U.K., Hollywood shot more films in Mexico than any other country abroad in the postwar era. The ties between these two film industries are on full display in this adaptation of a Graham Greene novel about a revolutionary priest who escapes a Central American dictatorship. John Ford directed the film throughout Mexico and at RKO’s Churubusco Studios, while master cinematographer Gabriel Figueroa, who had studied in Hollywood with director of photography Gregg Toland, brought his distinctive pictorialism. It’s a remarkable hybrid of Hollywood and Mexican talent and aesthetics.

In the postwar era, the Western genre flourished with a number of films that used Mexico as a political and geographic landscape. Two American gunslingers (Cooper and Lancaster) venture south of the border to pick up mercenary work in the Franco-Mexican War only to be drawn into an ideological conflict between the revolutionary Juaristas and the imperialist French. Shot entirely in Mexico in SuperScope, the film showcases director Robert Aldrich’s flair for stylish action, morally ambiguous characters, and punchy storytelling, which laid the groundwork for filmmakers like Sergio Leone and Sam Peckinpah.