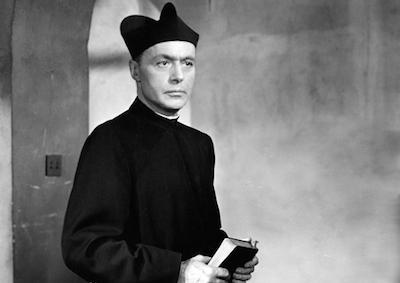 All is not well in the hushed spaces of Jesuit Saint Gregory’s Seminary, a Jesuit institution whose leasers obsess over the possible canonization of their founding figure, “Blessed Joseph,” while younger initiates yearn for greater meaning. But when bedridden Father Sierra leaves his sickbed after several years, the rush of devotion following this miracle seems to bring everyone’s wish closer, save for a progressive-minded priest and a doctor (and divinity school dropout) harboring doubts.

Followed by
Journey Into Light (1951)
Directed by Stuart Heisler.

John Barrows, a New England clergyman, loses his faith when his alcoholic wife commits suicide. Despondent, he moves to Los Angeles, where he begins drinking heavily—ending up on skid row and eventually in the drunk tank. However, a mission preacher and his blind daughter decide to save him. Produced independently by Joseph Bernard Productions, Journey into Light is one of Hollywood’s rare forays into religious filmmaking.