The East is Red 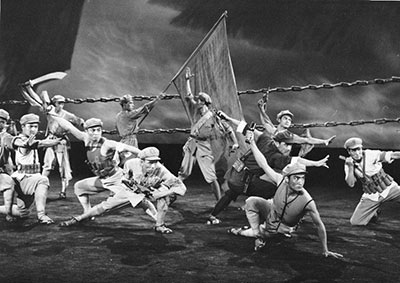 Though often thought of as the epitome of kitsch, model operas represent a key development in Chinese cinema’s tradition of filmed performance, unique both for their extreme ideological rigidity and their mesmerizingly abstract design. While the genre hit its peak during the second phase of the Cultural Revolution, when such films as Xie Tieli’s Taking Tiger Mountain by Strategy were the only films permitted in theaters, the form was developed over a number of years. Made during the first stirrings of the Cultural Revolution, and in many ways setting the template for what was to come—not least in the ideological fervor of its hard-line director Wang Ping, one of the very rare women allowed behind the camera during the period—The East Is Red was the most lavish, and most important, of these earlier films; its title song became the unofficial national anthem, and the film itself remained a cornerstone of Mao’s cult of personality until his death a decade later. Retelling the history of the Chinese Communist Party, from its founding in 1921 to its victory over the Nationalists in 1949, as a grand musical pageant, The East Is Red is both breathtaking and discomfiting in its monumental design; the opening sequence, for example, with vast numbers of spectators entering the Great Hall of the People, eerily recalls the films of Leni Riefenstahl.

“The films I directed before the Cultural Revolution are mostly about the contrast between the old society and the new society,” said Xie Jin, whose distinguished career extended from the pre- to post-Cultural Revolution periods. “What was the past like? What happened after the founding of New China?” The director boldly answered those questions in this tale of a violated peasant girl turned vicious fighting machine. The film’s first half, situated on the sweltering island of Hainan, has the feel of a “James Bond of the East,” as a dashing spy recruits our heroine to the Communist cause; the second half, featuring her army training and fearsome all-female combat scenes, crosses the eye-popping style of Communist propaganda posters with the gritty realism of Soviet war films, creating an unclassifiable, proto-pop art socialist cinematography. While Red Detachment is certainly brimming with cadre spirit—it became one of the Mainland’s most important films up to the fall of the Gang of Four, remade successively in literary, theater, model opera and new film versions—Xie Jin never lets the proceedings sink into sloganeering; he later claimed that he kept such classic (and decidedly un-revolutionary) Chinese novels as “Romance of Book and Sword” in mind while making the film.