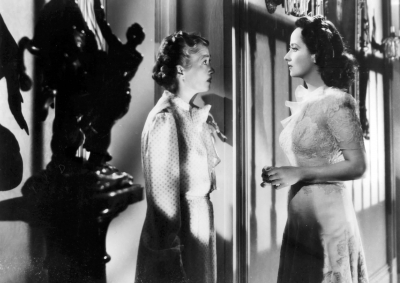 When a doctor is murdered, several witnesses identify Ruth Collins (Olivia de Haviland) as a prime suspect, but she has several airtight alibis. Then, the police realize that Ruth has an identical twin sister and put a psychiatrist (Lew Ayres) on the case. The doppelganger motif, so prevalent in noir and German cinema (Metropolis [1927]), allows director Robert Siodmak to construct a dark world of moral ambiguity, in which mirrors reflect multiple realities.

Both melodrama and film noir, Jealousy tells the story of a suicidal émigré writer whose lack of success makes him increasingly depressed, jealous, violent and willing to commit murder; yet it is he, not his young wife who falls victim to a murder of passion. A story of exile and loss: loss of the mother country, of success, of self-esteem, of a loved one’s affections and of freedom. The film’s schizophrenic atmosphere is under­scored through strong diagonal compositions and typical film noir high-contrast lighting.