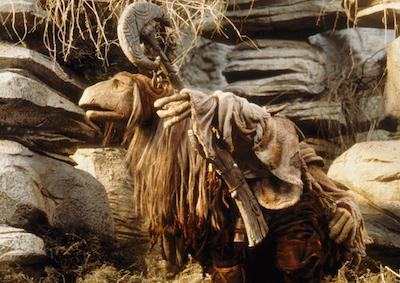 The Dark Crystal (1982)
Directed by Jim Henson and Frank Oz

When orphaned Gelfling Jen (Stephen Garlick) is tasked with repairing his planet’s ruptured, beloved crystal, he embarks on a quest with the brave and far-more resourceful Kira (Lisa Maxwell) to stop the malevolent, reptilian Skeksis from assuming eternal power. Longtime collaborators Henson and Oz team up for the first time as co-directors to create the mythical planet of Thra and all of its inhabitants, miraculously without resorting to a single on-screen appearance by an identifiable human being. Notably darker than the standard Muppet fare, this fantastical hero’s journey mixes traditional puppetry with groundbreaking animatronic technology for a timeless adventure tale of singular, dreamlike wonder. Henson’s insistence that it isn’t “healthy for children to always feel safe” results in a classic story of good, evil and their struggle to coexist, with enough ingenious world-building to satisfy the appetite of ardent fantasy enthusiasts young and old.