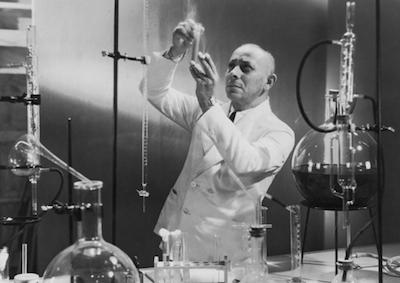 Erich von Stroheim stars in this ragtag riff on “The Premature Burial” filmed on a shoestring in the Bronx by Hungarian émigré John H. Auer. In just over an hour it pays homage to The Wedding March, Carl Th. Dreyer and Universal monsters. As a travesty of Poe it resides between the literary deviances of Universal’s Poe “adaptations” in the 1930s and American International Pictures’ market-driven liberties in the 1960s, redeemed by van Stroheim’s megalomania as “The Man You Love to Hate.”

Followed by
The Drums of Jeopardy (1931)

Directed by George B. Seitz.

Warner Oland is man Bolshevik Dr. Boris Karlov, vowing to exterminate the black sheep of a White Russian family responsible for his daughter’s death. Spinster Clara Blandick is his nemesis and it’s worth the price of admission to see Auntie Em hold her own against Dr. Fu Machu. Six separate sources saved The Drums of Jeopardy from the brink of extinction.