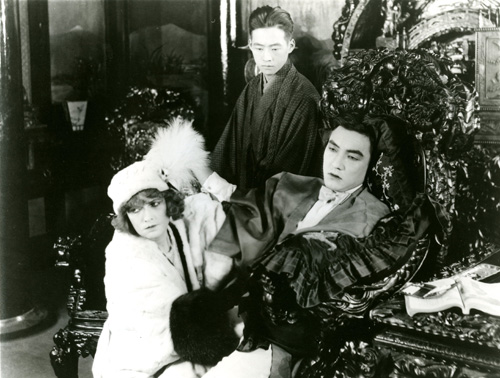 Edith Hardy, a social climbing stockbroker’s wife, is bored by her husband’s frugality, and complains of the same to wealthy Japanese importer Hirushu Tori, a member of her glittering social circle. Treasurer of a charitable fund, Edith rashly sinks $10,000 in an investment which quickly goes south. Seeking help from Tori, Edith luridly falls under his influence until the scandal blows wide open.

Followed by:
The Golden Chance (1915)
Directed by Cecil B. DeMille.

Seamstress Mary Denby sews to survive, taking up the slack left by her unemployed and alcoholic husband, Steve. Mary is invited by her wealthy employer to masquerade as a society girl to attract the attention of a wealthy businessman, Roger. Learning of the scheme, Steve plots to exploit Roger or kill him. The violent outcome vaults Mary to a new world, fraught with moral complexity.