The Captain Hates the Sea 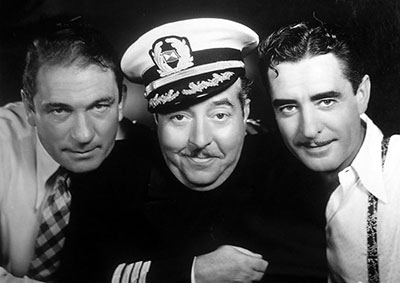 “The Captain Hates the Sea”  (1934)
Directed by Lewis Milestone

The Grand Hotel formula is given a welcome, sardonic twist in this unusual comedy-drama, adapted by Wallace Smith from his novel of the same title and directed by Lewis Milestone with a loving eye for the rhythms of shipboard life. The Captain Hates the Sea is in many was a typical Columbia “A” production from the period just before the studio’s breakthrough to major rank. Unable to complete with studios like Paramount and MGM in star power or lavish production values, Columbia under its hard-nosed production chief Harry Cohn concentrated on well-crafted scripts, competent players, and sets that stressed realism over glamorous make-believe. (Many scenes in The Captain Hates the Sea were obviously shot on board a real ship.) Columbia could not match the all-star cast that MGM lavished on Grand Hotel, but Milestone drew superb performances from Hollywood’s better character actors. Walter Connolly has the title role of the bored captain whose ship cruises regularly between Los Angeles and New York by way of the Panama Canal. This voyage out, Connolly’s passengers and crew include a jaunty cop-turned-private eye (Victor McLaglen), a beautiful woman with a past (Wynne Gibson), a determinedly merry widow (Alison Skipworth), an alcoholic screenwriter (John Gilbert), a prim librarian who is not quite what she seems (Helen Vinson), a suave bond thief (Fred Keating), the ship’s obliging bartender (Walter Catlett). Even The Three Stooges perform creditably in smaller roles.

Cohn and Milestone quarreled over the casting of Gilbert. The former silent star, his career in precipitous decline, had become a notorious real-life alcoholic, and Cohn was reluctant to approve him for a role that might be seen as exploitative of his illness and also encourage a production-delaying binge. As it happened, the cast included several other notable tipplers, including Connolly, McLaglen, Leon Errol and Catlett. Location shooting off Catalina Island dragged on for days as Milestone struggled to keep his players sober long enough to complete the picture. Cohn’s frustration as he watched the film soar over budget occasioned one of the most often quoted telegram exchanges in Hollywood history. “Hurry up,” Cohn wired. “The costs are staggering.” To which Milestone wired back, “So is the cast.” The role of Steve Bramley, a knowing former newspaperman, was a departure for Gilbert, who had specialized in ultra-romantic costume roles. Bramley’s well-tailored lounge suits flattered Gilbert’s thin frame, while his slicked-down hair and trim mustache suggested a resemblance to William Powell in his Thin Man roles. Even Gilbert’s tenor voice, which made audiences laugh when he tried to impersonate a European nobleman, sounded right coming from a discouraged hack screenwriter. His sensitive portrayal might have led to a new career, but it came too late. The Captain Hates the Sea was Gilbert’s last film. He died of a heart attack two years late at the age of 41.–Charles Hopkins

Willie Whopper, “the little boy with a big imagination,” regales us with a fanciful account of what happened after he snagged King Neptune’s crown while out fishing one day. 35mm, color, 7 min.

On the train back from Hollywood, Earl Carroll’s showgirls reminisce about the celebrities they met while making the film version of “Murder at the Vanities.” 35mm, b/w, 10 min. HEARST

“Metrotone News, Vol. 6, No. 203” (Oct. 1, 1934)
President Roosevelt calls for a truce between industry and labor while the country struggles to free itself from the Depression. Warden Lawes of Sing-Sing discusses the plight of young men who turn to crime because they lack the opportunity to earn an honest living.