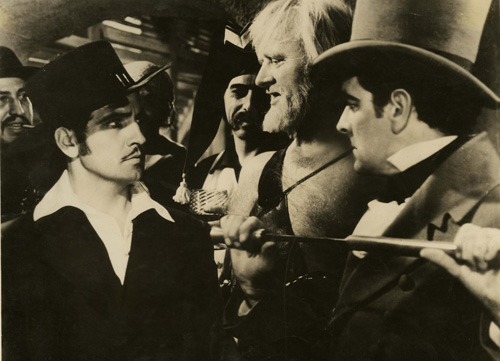 The Buccaneer (1938)
Directed by Cecil B. DeMille.

In one of director Cecil B. DeMille’s rarest sound films, Fredric March stars as Jean Lafitte, the French pirate transformed into an American folk hero for his exploits at the Battle of New Orleans—all for the love of an American aristocrat (Margot Grahame), as DeMille tells it. As an invading British army approaches New Orleans, Lafitte sees a chance to join forces with Andrew Jackson and earn the respect of decent society while all afoot spies and traitors work to thwart his plans. Hungarian actress Franciska Gaal stars as Gretchen, a shipwrecked waif plucked from the sea by Lafitte.

Followed by:
Reap the Wild Wind (1942)
Directed by Cecil B. DeMille.

In 1840s Key West, Loxi (Paulette Goddard) is owner of a salvage company that rescues cargo from scuttled ships. When she becomes convinced that the ruined ship of disgraced captain Jack Stuart (John Wayne) was sabotaged by a competing salvage company, she sets out to clear his name. This puts her face to face with naval lawyer Steven Tolliver (Ray Milland), and soon, at the center of a romantic triangle. Elaborate underwater photography, a bold color palette and a climactic battle with an octopus, make this sea epic one of director Cecil B. DeMille’s most fascinating entries.

Preceded by:
Gretchen Comes Across (1938)