The Bridegroom, The Actress, and The Pimp and The Chronicle of Anna Magdalena Bach 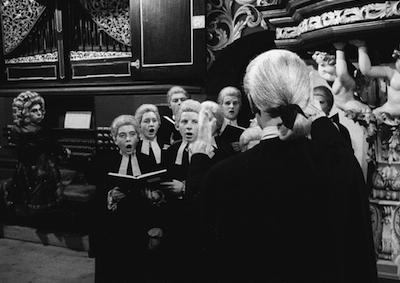 Love is a tawdry transaction, and a coercive weapon of the ruling class, in this exhilarating, controversial product of the Munich Action-Theater, an immediate forerunner to Rainer Werner Fassbinder’s Anti-Theater productions of the late 1960s. Invoking the writings of Chairman Mao and the events of Paris 1968, Straub and Huillet cast Hermann, Schygulla and Raben (who would soon become regulars of the Fassbinder acting ensemble) along with Fassbinder himself in this radical condensation of Ferdinand Bruckner’s 1926 play Pains of Youth, a single 11-minute shot that is subsumed within an intricately structured, 12-shot constellation of other quotations, including poetry by Saint John of the Cross and musical passages from Bach’s Ascension Oratorio.

Johann Sebastian Bach and his wife Anna Magdalena endured the successive deaths of 10 of their young children, a grief we can scarcely fathom any more than we can articulate the beauty of Bach’s music, at once an expression of his earthly anguish and his joyous faith in divine love. Nonetheless, Straub-Huillet attempt to capture Bach’s ineffable artistry in one of their most sublime films. The seemingly musical structure is based on recitations of Anna Magdalena’s intimately domestic, yet fictionalized, letters to her husband, and on performances in period clothes with period instruments and orchestrations—a radical conceit for the 1960s—of Bach’s cantatas, sonatas and Passion According to Saint Matthew in the very rooms and churches where he composed and conducted them. “With the Bach film,” Straub said, “we have almost entirely a documentary reality—the actual music and actual manuscript pages, real musicians—and only one seventeenth of fiction, and despite it all, the totality becomes very nearly a novel…. [There is] no divorce in Bach between art, life and intellect, sacred and secular music.”