‘The Bachelor Party’ and Baby the Rain Must Fall’ 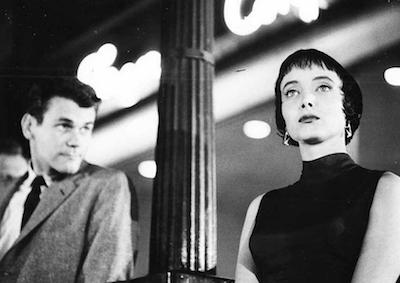 Paddy Chayefsky’s screen adaptation of his Philco Television Playhouse drama incisively explores themes of ambition, loneliness and evolving roles of masculinity in a rapidly changing postwar America. The top-notch ensemble cast is led by Don Murray, starring as a young husband torn by the lifetime of responsibility facing him with the impending birth of his child. While Chayefsky’s character study is imbued with humor throughout, Murray’s purposely melancholic performance breaks beneath the surface, embodying the dark, collective anxieties of the breadwinning men of the Mad Men era. Carolyn Jones, in an indelible Academy Award-nominated performance, represents Chayefsky’s vision of the allure and dangers of the changing times as a brilliant but heartbreakingly lonely bohemian.

Baby the Rain Must Fall (1965)
Directed by Robert Mulligan

Shot on location in screenwriter Horton Foote’s hometown of Wharton, Texas, this Southern gothic tale stars Steve McQueen as a rockabilly singer tormented by horrific abuse during his childhood. Reuniting Foote with director Robert Mulligan, his creative partner from their landmark film adaptation of To Kill a Mockingbird (1962), this complex drama succeeds mainly as a showcase for McQueen’s method-esque performance of a volatile character unhinged by inner demons. Buoyed by Ernest Laszlo’s moody cinematography and a stellar cast including Lee Remick and Don Murray, Baby the Rain Must Fall is a notable curio in McQueen’s career, demonstrating a seldom-seen side of the superstar’s talents.