The Arch & China Behind 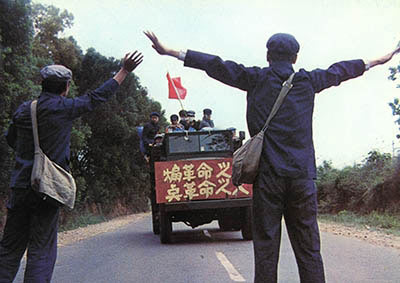 The incomparably original Cecile Tang, one of the few female filmmakers working in Hong Kong in the ‘60s and ‘70s, made two of the most interesting and important films of the era with her debut The Arch and its follow-up China Behind. A profound character study that feels like a hybrid of Kenji Mizoguchi’s tales of female sacrifice, the tragic romances of Chinese costume drama and the interruptive techniques of the French New Wave, The Arch focuses on a wealthy widow (Lisa Lu) in the early Qing dynasty on the eve of her crowning achievement, the erection of a triumphal arch in honor of her many good works. When a young and handsome cavalry officer is billeted at her palatial house and soon begins to court both the matriarch and her immature daughter, the widow is forced to choose between her own happiness and her daughter’s well-being. Shot in soft, luminous black and white by Satyajit Ray’s longtime cinematographer Subrata Mitra, The Arch is “one of the most significant art-house classics in [Hong Kong] film history…as if Alain Resnais met Henrik Ibsen in seventeenth-century China” (Edmund Lee, Time Out Hong Kong).

35mm, b/w, in Mandarin with English subtitles, 95 min. Followed by:

Highly influenced by the French New Wave and presaging many aspects of the Hong Kong New Wave to come, the films of Cecile Tang stand apart from the kung-fu and Chinese opera films that dominated ‘70s Hong Kong cinema. One of the most exciting discoveries of this series, Tong’s second film China Behind—banned for over a decade by the Hong Kong government, on the grounds that it would “damage good relations with other territories”—follows a group of Mainlanders as they desperately try to flee from a China in thrall to the Cultural Revolution. Narrowly escaping capture as they set out, the fugitives are willing to do anything—including a long, death-defying swim—to reach freedom. But what they find when they reach the haven of Hong Kong is a far cry from their dreams of liberty; the final passages of the film are a damning and powerful indictment of both the socialist and free-market “utopias” that defined the ideological landscape of the century just past. “One of the earliest films to deal with the clash of Communist and capitalist ideals that would inevitably manifest itself with the 1997 handover[;] the moral degradation and spiritual disenchantment of its characters reveal the dehumanizing effects felt [on] both sides of the border” (Edmund Lee, Time Out Hong Kong).