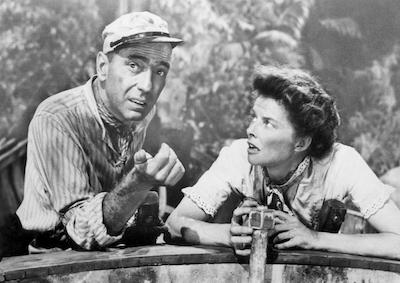 While The Red Badge of Courage (1952) languished in post-production in Hollywood, Huston, his principal cast (Humphrey Bogart and Katharine Hepburn) and crew languished fighting the elements on location in Uganda and the Belgian Congo shooting The African Queen. A famously beleaguered production that began without all its financing in place or an ending to the script, Huston and James Agee’s adaption of C.S. Forester’s novel would become one of the director’s most beloved films and indeed, one of the most beloved films ever made. Bogart plays a slovenly riverboat captain persuaded by Hepburn’s prim missionary during World War I to journey hundreds of miles to destroy a German warship. The mission, however, comes in a distant second to the unlikely chemistry between Bogart and Hepburn, who deliver their finest performances as two lonely people who go through hell just to realize all they need is each other. Bogart would win his only Oscar for his performance, with nominations for Hepburn along with Huston’s direction and script.

Heaven Knows, Mr. Allison allowed Huston a chance to revisit themes similar to those in The African Queen, with a grizzled Marine (Robert Mitchum) and a devoted nun (Deborah Kerr) forming an unexpected bond in a time of crisis, here on a Pacific island during WWII. Indeed, Mr. Allison is often overlooked in favor of Queen, although Huston himself held it in high esteem as “one of the best things I ever made.” It certainly went on to become one of his biggest box office hits while earning him his seventh Oscar nomination for best screenplay.