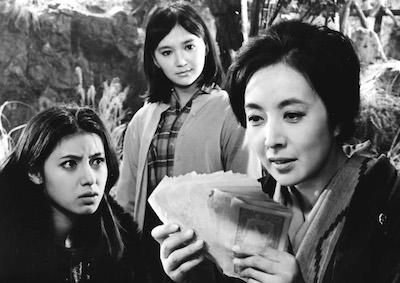 Set in the 1930s, Tattooed Life (1965) is the story of two brothers: Kenji, an art student, and Tetsu, who is working as a yakuza to help pay for Kenji’s tuition. When a hit job goes horribly wrong, the brothers flee. They end up finding work in a mine—and falling in love with the owner’s wife and daughter. But will Tetsu’s gang tattoos reveal the brothers’ secret past? The first film to earn director Seijun Suzuki a warning about “going too far” from his Nikkatsu bosses, Tattooed Life contains one of his most iconic and audacious violations of film form: a final fight scene in which the floor suddenly and illogically disappears, and the action is filmed from below the actors’ feet.

A 1960s riff on the opera Carmen (including a rock version of its famous aria “Habanero”), this picaresque tale sends its heroine from the countryside to Osaka and Tokyo in search of success as a singer. Her journey is fraught with exploitation and abuse at the hands of nefarious men—until Carmen seeks revenge. Mixing comedy, biting social commentary and director Seijun Suzuki’s customarily outrageous stylistic flourishes, this fast-paced gem is an overlooked classic from his creative late period at Nikkatsu Studios.