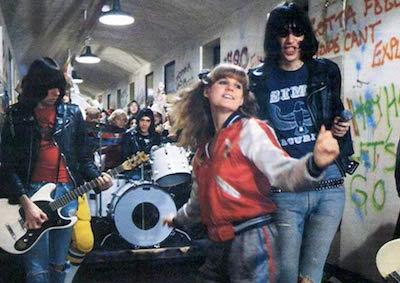 Filmed primarily in the abandoned housing tracts that would soon become Interstate 105, writer-director Penelope Spheeris’ narrative follow-up to her seminal punk rock doc The Decline of Western Civilization is deeply embedded within a group of disillusioned young runaways fed up with the pains inflicted by a cul-de-sac lifestyle. Roaming Los Angeles’ southeastern Gateway Cities is a pitch-perfect cast made up of authentic street kids and musicians, most of whom had never passed before the lens of a movie camera—including a future Red Hot Chili Peppers bassist herein credited as “Mike B. The Flea.” Possessed with moments that pass for pure vérité, with uncut, voltaic performances from Southland punk stalwarts T.S.O.L., The Vandals and D.I., Suburbia pairs scripted dialogue with the electricity (and danger) of bona fide mosh pits. What could find easy comparisons in earlier teenage rebellion films like Over the Edge (1979) and Rumble Fish (1983) instead opts to eschew judgement for a compassionate look at a Spheeris’ special brand of (anti)hero. New 2K restoration.

Teenage punkette Riff Randell is, without question, the world’s biggest Ramones fan — if the world is only as big as Vince Lombardi High School. But isn’t the quad our entire world when we’re adolescents? In a rare depiction of total high school solidarity against the fascistic powers-that-be (namely, Mary Woronov’s whip-cracking, music-loathing Principal Togar), this Crayola-colored cadre of high school hellcats stands toe-to-toe with Grease and screams “I don’t care about history!” in Sandy and Danny’s faces. “Director Allan Arkush,” says Nathin Rabin, “channels Frank Tashlin and the smartass spirit of Mad Magazine throughout the film, transforming his love letter to rock ‘n’ roll and the eternal allure of being a teenager at war with parents into a live-action cartoon filled with giddily surreal touches.”